We’ve Been Shortlisted For The Irish Content Marketing Awards

We at The Business Fairy Digital Marketing Agency are honoured to have been shortlisted for our work on re-branding Tipperary Rape Crisis Centre – https://trcc.ie/ TBF founder Aisling Hurley stated that  ‘When TRCC came to us for help, the stories were harrowing and like all charities, the budget was tight. We brought it to the team and every single one of them agreed that TRCC is a fabulous charity.  Over several months, we undertook market research on behalf of the organisation and ran focus groups to understand what was required to help rebrand and relaunch the charity.’ TBF created a new modern logo for the charity as well as a interactive website that includes motion graphics, with the hope to encourage donations, volunteers and raise brand awareness as TRCC provides their services freely. We are all delighted that the work done by TBF team has been recognised for a charity such as TRCC.

TRCC manager Natasha O’Keeffe says ‘we can’t thank this company enough, TRCC’s vision is a society where sexual violence is not tolerated.  The new branding and specialised content has really helped us get a clear message out there. They’ve made it easier for survivors to reach us, easier for people to donate and volunteer, and most importantly they’ve made it easier to start the conversation amongst the general public.’ 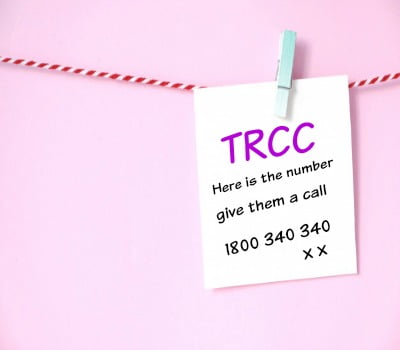 The Business Fairy company was founded by Aisling Hurley (also co-founder of Teamwoodcraft) and now has a client list that includes, government agencies, pharma companies, and international companies. They have a sub office in Tipperary, headed up by Niamh Quinn,  You can see the work that was shortlisted on https://trcc.ie.

The Content Market Awards is an exciting and national event. We are truly honored to be shortlisted for our work with  such a worthwhile charity. We would like to raise awareness for this great charity that relies on donations and volunteers to enable them to  continue to help and support people who need them. You can easily donate via their website –https://trcc.ie/  and every euro counts.

Within Ireland, rape is still an issue that affects many people. At present there is no national Rape Crisis Centre in Ireland, but there are 16 separate centres that are all fighting for funding.  TRCC is a service that offers free support to people who need them.

Within the news we see stories of women been sex trafficked within Ireland. One case was back in 2013.  A young Romanian girl called Anna was training to become a nurse, in London. One night she was kidnapped by people she knew (they had lived in the same rented accomodation as Anna). Her kidnappers brought her to Galway in Ireland where she was pimped out. The only way for Anna to survive and be fed was to have sex with men against her will. Anna told her story to Newstalk’s Pat Kenny earlier this year. You can see this post on https://trcc.ie/pat-kennys-newstalk-interview-with-trafficked-anna/. It is shocking to think this can happen in modern Ireland.

The #metoo movement came to light after the Hollywood story regarding the movie director Harvey Weinstein allegations. The #meto movement was created for other people to share their stories. So we at TBF knew we had to do something to help TRCC and their clients.

The project involved making sure we understood how the Rape Crisis Centre was perceived amongst the general public. A focus group was established by the agency to understand the Rape Crisis centre brand perception, usability of the current digital assets and to test consumer reaction to a rebrand. Analysis of the focus group findings revealed that there were several issues with the brand.

2. It was hard to find the information or understand how to become involved

3. The re-brand we had designed was ‘to soft’ for the message, it needed to be more militant in the 100th year of the suffragette.

We went back to the drawing board and re-designed the brand, building content around the new brand. We understood that to help the organisation, the logo had to stand out and start a conversation. We felt that an illustrative design would best encapsulate the message. The new logo consists of two hands making the shape of a heart with a mechanism of cogs surrounding them. The cogs represent many services provided at the centre.

We included the symbol for women and men within the design as TRCC caters for all ages, creeds, ethnic groups and orientations. In the era of non-verbal culture, the symbol of the two hearts together is a recent cultural phenomenon, representing ‘love’ and ‘thank you’. It conveys meaning without the use of words. It has been made a prominent icon through its use by social influencers including Taylor Swift, Lady Gaga, Kylie Minogue and Janet Jackson. This shows that the charity is culturally aware.

Blue represents trust and peace. Purple represents creativity. Black was used to represent the hidden and unknown. Many survivors choose not to tell their family or friends and the combination of the illustration represents them moving from darkness into the trusting hands and care of TRCC. We then incorporated the new logo into new campaigns and a new website for TRCC.

Next we designed the website. Sexual Trauma is a harrowing topic so we wanted people to feel that they could talk about it. We created a silent motion graphic video that demonstrates the services and clearly states “we are here to help”. 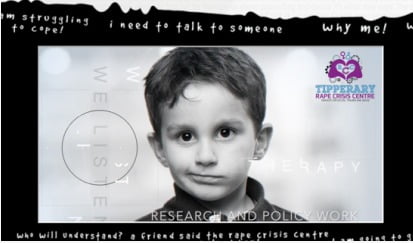 The innovation on the website included not only the silent video, but the user experience. The donate button was specifically animated to encourage more users to donate via the website. A thank-you message was also included with a note explaining that ‘if you only have 10 cent, we only need 10 of those to make a euro’ thereby encouraging even small amounts to be donated. The menu was also designed so that the user can access help quickly, or hide the page instantly.

We then added search engine optimised blog posts to the website to demonstrate that the centre is a voice against sexual violence around the world. Content includes an article about sex trafficking in Ireland, and a call for clemency for Noura Hussein https://trcc.ie/appeal-for-clemency-for-noura-hussein/ . By including international stories, the content demonstrates that it is okay to talk about sexual violence and that is never the fault of the victim. The blogs have opened the conversation and raised the awareness of the brand and what it does.

The brand message was amplified across social media channels including facebook and Twitter, both of which were given re-brands. To further increase awareness we designed and introduced the #Lightfor16 campaign. This is a year round text campaign, with a particular focus on the 16 days of activism in November. https://trcc.ie/tipperary-rape-crisis-centre-light-a-candle-for-sixteen/ Through the use of the hashtag campaign cross social media the campaign raises the profile of TRCC whilst continuing the conversation around sexual violence.

By modernising the brand we have made it contemporary, approachable and a mine of easy to access information for users.

The Business Fairy has stiff competition at the CMA 2018 with companies such as Bank of Ireland and Jobbio being shortlisted within the same categories. To Be in such company is an honor and we hope from being shortlisted it will give more awareness to Tipperary Rape Crisis Centre – https://trcc.ie/

The winners will be revealed at the gala awards ceremony on Thursday, September 20th, at the Ballsbridge Hotel, Dublin.