Bootbox Innovation at the Ploughing 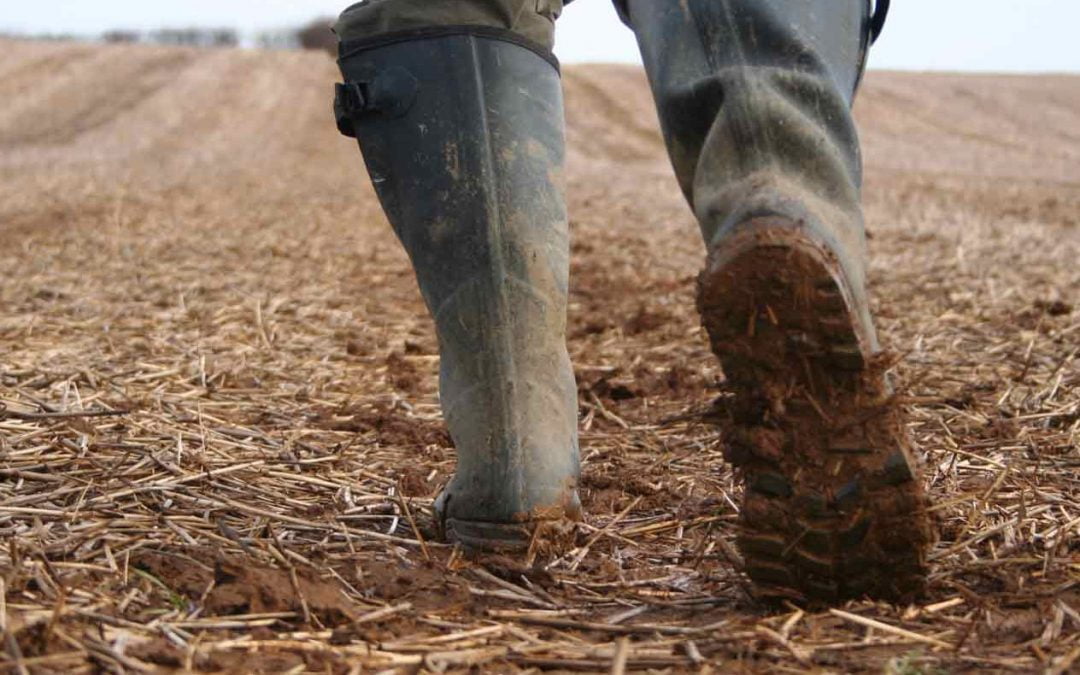 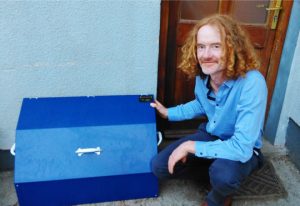 On our wandering at this year’s Ploughing, we discovered local business man Paul Codd Engineering Ltd. who was launching his new product The Boot Box.  We loved the name so we had to stop and ask him all about it.  Based in Co. Wexford, Paul’s new product is a new type of storage unit for your wellies, work boots, garden boots etc. indeed it can be whatever you want it to be!

As we all know, Irish weather affects everything but Paul has thought of that and has made it from durable powder coated steel.  At the moment, it comes in two colours: marine blue and charcoal grey. There is a raised steel mesh for the base. This allows water, dirt etc. to drain away from your wellies, really handy when you’re trudging in from a days gardening or farming.   He designed it so that it snuggly fits  at the doorway (see picture one above).
Reception to the product has been great at the Ploughing with people buying it to store kindling, briquettes, firewood etc. We loved it as it’s so tidy, it can fit in any space.  It’s a nice size for older people with gas struts helping to keep the lid open, so it doesn’t close unexpectedly on fingers.  Other uses include kids football boots storage, they can be left in it until they have time to come back and clean them.
So who inspired Paul?  None other than his lovely Mum.  “The original Boot Box was made thanks to my mum”!  he says.  “Myself and my late father often left our wellies in the hallway, we would wash them with a spray hose first to clean them, but sometimes not so well. You can imagine the mess left in the hallway. This drove my mother mad! As necessity is the mother of invention, I made the first Boot Box to keep my mum happy”. 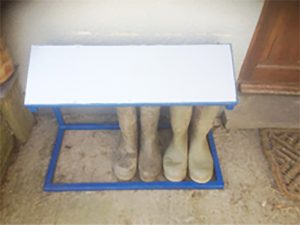 The first prototype originally called “the welly guard”, (to the left) was made for his neighbours and visitors. “I never really had any intention of selling it. As I was making other products such as wrought iron gates and lights with my welding/fabrication business”.  Like us all, Paul was affected by the recession/depression and had to re-invent himself.
“During the recession I went to UCD to study archaeology and in the final semester in the final year, 2015, I picked a module called Entrepreneurial Endeavour. This was a really hands on module, with no exams but lots of class work and presentations. During one class the tutor asked us if we had any ideas we would like to share with the class. The Boot Box came to mind, but I had never really told anyone about it before and thought everyone else would have brilliant ideas about apps and stuff. But I plucked up the courage to stand in front of the class and tell them about my idea. That’s when the whole process of developing The Boot Box began and going out onto the streets of Dublin to ask passer’s by their opinion of The Boot Box.  This was a bit scary”.  But in general the response was very positive. 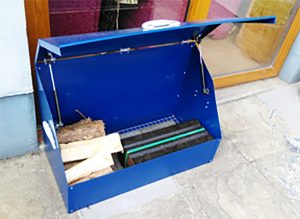 Fired up with enthusiasm from the positive feedback, Paul kept improving the prototype.  “Around this time, I also successfully applied for an Innovation Voucher from Enterprise Ireland to help develop the Boot Box. The School of Engineering UCD were very helpful in showing me around their workshop and offering to help me develop the project”.
So has he any advice for would be entrepreneurs?  “After college I went and did a post graduate course, Innovation, Entrepreneurship and Enterprise run by UCD in St. Patrick’s Gateway centre in Waterford. This was similar to the module in UCD, but longer.   Outside companies were even involved with the projects. I would highly recommend this course”.   What was the most difficult moment?  “While it was nerve wracking getting up in front of the class to make presentations, it was a good learning curve. Sometimes it’s necessary to step outside your comfort zone and see where it takes you”. 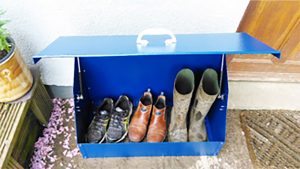 So he did it again, mentioned his idea as a possible project. Thankfully some of his class mates were happy to help out with a group presentation. From telling everyone in the class, friends and family about his idea he got a lot more feedback. This co-creation helped to develop The Boot Box from the original open structure, to the enclosed multi-purpose storage unit it is today (to the left).  And his progress continues.  “Some local shops have kindly said they will stock it”.  On the last day of the Ploughing Championship, Thursday the 22nd at 12.50, Paul made a presentation of The Boot Box in The Local Enterprise Village Stand (No. 765).  Onwards and upwards.   If you’d like to learn more about Paul or the Bootbox, you can contact him at paulcodd@engineer.com.